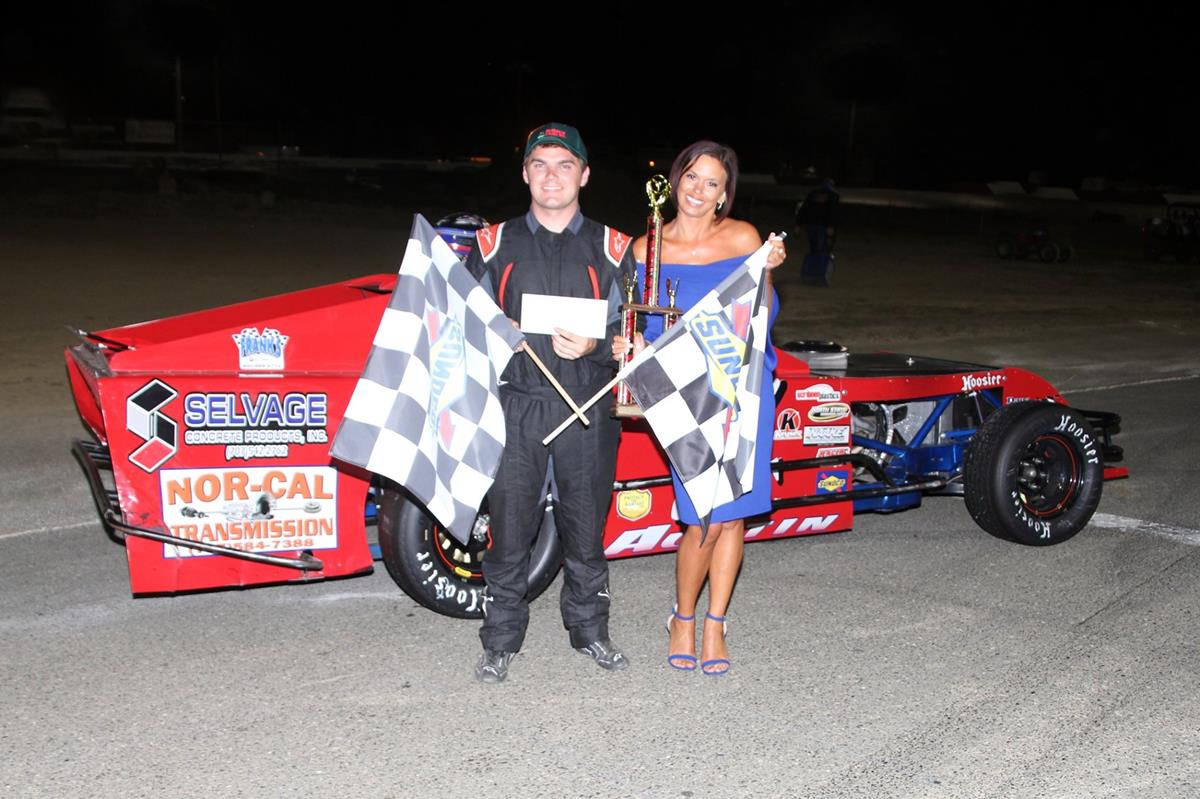 Cameron Austin, Charley Tour Among Winners On Wild Night At The Races

It was a rough and rowdy night on the asphalt at Redwood Acres Raceway Saturday evening. There was plenty of exciting racing but several major incidents punctuated the event as well. McMurray And Sons presented the event which featured the North State Modified Series and the Upstate Bomber Series along with Bandoleros, roadrunners, mini stocks and Legends.

As an added bonus and in part of their 100-year anniversary, McMurray And Sons boosted the purse for the top three finishers for all divisions on the night. North Coast Lighting And Electric did the same while Upstate Bomber driver Charlie Tour gave $100 to those who finished last in the feature events for the Upstate Bombers, Bandoleros and roadrunners.

The Anderson Logging Bandoleros saw their largest turnout since the division started at RAR last season with seven drivers total. Aiden Kimberling’s 21.205 was fastest among all drivers in qualifying. Maleesa Miles took the trophy dash win with Kadence Mace victorious in the heat race. All season long, the initial start of the feature event for the Bandoleros has been the major determining factor in regards to who ends up being the victor. The same held true for this feature as Miles jumped to the race lead on lap one and never relinquished the lead. Kimberling dogged Miles all race long but was unable to force Miles into making a mistake. At the finish it was Miles winning over Kimberling, Mace, MKinzy Uselton and Quentin Ikeya.

Tim Ratzlaff was fast time for the Compass Community Credit Union roadrunners with a 20.259. Daniel Buell was the trophy dash winner while the heat races were won by Bryan Brandt and Buell. The 20-lap roadrunner feature played out similarly to the Bandolero main. In this case, Buell maneuvered his way to the lead on lap one and controlled the event from there. As the field spread out the best action on the track took place mid-pack as Bryan Brandt, Steve Paiment, Jordan Paiment and Shannon Palmer fought hard for position. Up front, Buell held a comfortable margin over Nick Ford the entire event and was able to take the victory by over four and a half seconds. A major accident off turn two occurred just as the leaders crossed the line with both Steve and Jordan Paiment hit the wall hard. Fortunately, both drivers were alright. JR Brandt placed third with Tim Ratzlaff taking fourth and Bryan Brandt placing fifth.

Qualifying for the Compass Community Credit Union mini stocks was paced by Gary Klinetobe with an 18.924 time. Klinetobe followed up fast time honors with the trophy dash win. Brett Murrell took the honors in the heat race. Rookie Eric O’Ferrall led the opening two circuits of the 20-lap main event before giving way to Brett Murrell on lap three. Murrell was able to gain several car lengths over the pack the next two laps as Brian Murrell, Jr. and Jarrett Mayo were also able to get by O’Ferrall on lap five. Brett was able to build up a comfortable gap over older brother Brian and maintained his advantage the entire race. The closest action was the fight for the fourth position as Rick Estes and Klinetobe fought hard for position. Brett Murrell’s advantage over Brian Murrell, Jr. was nearly 3.6 seconds at the checkered flag. Jarrett Mayo took third while Estes was able to withstand Klinetobe’s race-long pressure as the two rounded out the top five.

Leonard Ward was the fastest of all drivers in the North Coast Lighting And Electric Legends division with a time of 18.273. Ward went on to take wins in both the trophy dash and the heat race. MKinzy Uselton led the opening lap of the 20-circuit main event before James Nichols took over on lap two. Ward moved to the lead on lap three and took control of the race. Lap 13 saw a major incident when Uselton and Carlee Austin got tangled up racing for position. Uselton hit the front stretch wall forcing her out of action. She was able to exit her car on her own power but later went to the local medical facility for precautionary measures. Uselton did not suffer any serious injuries. The race resumed with Ward leading the rest of the way to take the win. Austin was able to finish second over Nichols and Scott Taylor. Uselton was credited with fifth.

The Upstate Bomber Series returned to the Acres for the second and final time in 2019. Charlie Collins was fast time with an 18.365. Jimmy Sorrels won the trophy dash. Two heat races were ran with the first determining starting positions of the inside line for the feature event while the second determined the outside starting positions. Charley Tour’s win in heat one granted him pole position for the main while Donnie Hyman earned the outside front row position with his win in the second heat.

The feature event saw its original distance cut due to several rather severe incidents throughout the race. The first occurred on lap five when Sorrels and Charlie Collins got tangled somehow. Collins car climbed on the driver’s side of Sorrels car and the two spun in the third turn as Collins’ car rested on top of Sorrels’. Thankfully nobody was harmed.

Other spins slowed the race throughout the next 20 laps until three major incidents and lengthy cleanups forced the hand of series’ officials. On lap 24, Donnie Hyman was turned on the front stretch, spun and hit the wall. On the restart, Jeff French made contact with David Dillinger going into the third turn with Dillinger hitting the wall hard. The final yellow flew just after the next restart when Brenton Smith hit the wall off turn two severely damaging his car. Thankfully none of the incidents resulted in any injury.

Upstate officials called the race after Smith’s wreck giving Charley Tour the win. Tour led the race from start to finish and he and second place finisher Dustin Kuhl were the only two drivers who were not involved in an incident in the event. Dan Knight was substitute driving for series points leader Mikey Lovell and survived several close calls to finish third. Local favorites Ryan Walters and Jim Redd also had a few brushes with danger but came home fourth and fifth.

The North State Modified Series was in action for their second of three visits at Redwood Acres Raceway this season. Cameron Austin led the NSMS standings going into the weekend and started everything off right with fast time, a 16.455. Keith Bloom was victorious in the Lucas Oil Dash for Cash which pocketed him $100. Richie Potts’ second in the dash gave him $50.

The invert for the McMurray And Sons 60 was sixth which put Potts on the front row. The race started off with an incident when Randy Houston and Scott Winters came together in the first turn. Rich Cobb was also involved and was forced out of the race. The incident knocked Houston off the lead lap while Winters had to restart at the rear of the field. The green flag fell and the racing was clean all the way to the finish. Potts held the lead while Darrin Knight was all over him.

With the front two battling, Austin began to make his presence felt. After biding his time for several laps, Austin pounced on the two leaders on lap 15 and he was able to use the high line to get by Knight and Potts. Austin pulled away while Potts and Knight continued to battle with Winters moving his way back into the picture. On lap 18, Winters got by Knight for third. Three laps later, Winters moved to second with Knight following him into third dropping Potts back to fourth.

The next 2/3 of the race was a cat and mouse game. Austin and Winters were evenly matched with neither driver having a speed advantage. As the laps wore on, getting through slower traffic proved to be the determining factor as to whether or not Austin or Winters would win. As the laps ticked down, Winters was able to edge closer and closer to Austin until the final handful of laps when Austin came upon several cars racing for position including Potts and Darrin Sullivan for fourth position. Winters made up significant ground and on the last lap only a few car lengths separate first and second. On the final lap going into turn three, Winters nearly got to Austin’s bumper but wasn’t close enough to shake the leader from his position. The finish proved hectic as Potts and Sullivan tangled just in front of the leaders at the checkered flag but it was Austin crossing the line first over Winters. Knight finished third while Sullivan took fourth and Potts was credited with fifth.