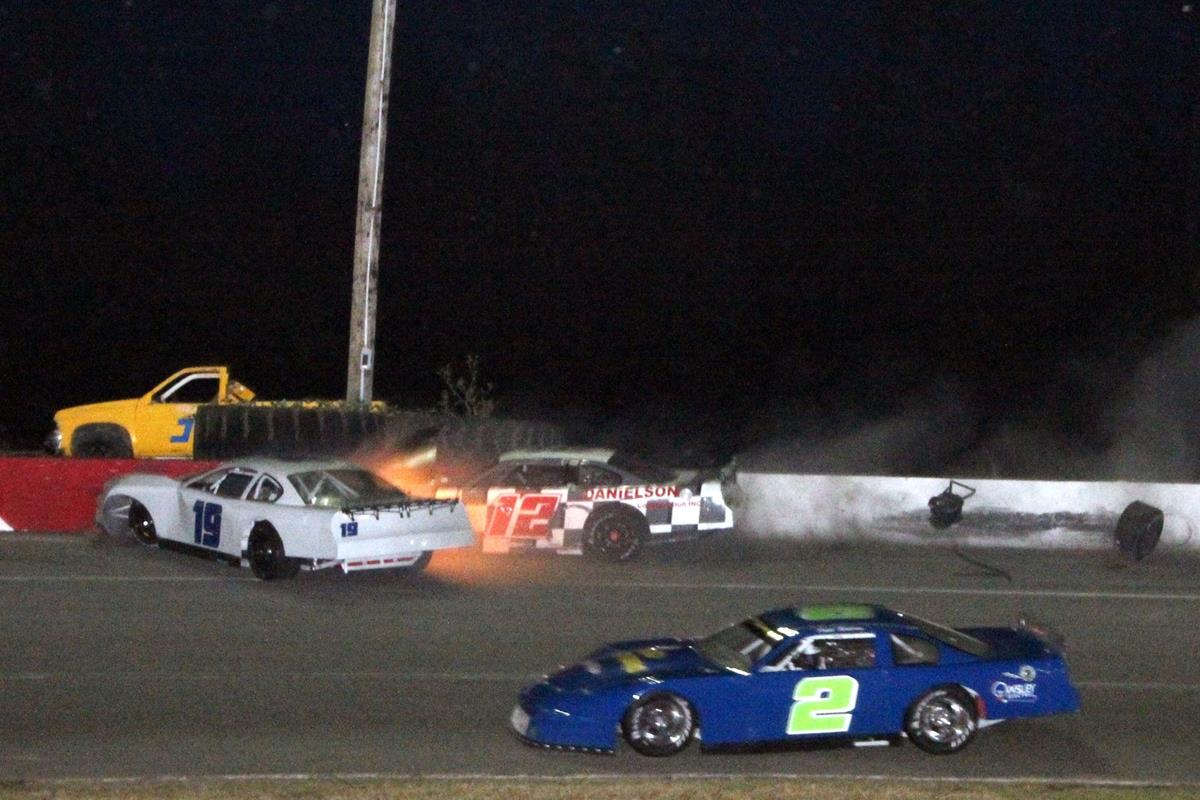 Saturday night featured a little bit of everything at Redwood Acres Raceway. In addition to very intense action, close competition and exciting racing, several major incidents slowed the events on Papé Machinery/Papé Material Handling Night at the Races. All in all, it was another interesting and memorable night at the 3/8-mile paved oval.

Prior to the start of the event, a moment of silence was held for Darlene Dungan. Darlene was a close friend of RAR for many years working in the souvenir booth. She also helped organize silent auctions coinciding with the races in support of bone marrow transplant research. Darlene was the wife if Casey Dungan who has been involved in the Redwood Acres Raceway scene for over 50 years both as a driver and a crew member.

Aiden Kimberling won both the trophy dash and heat race. The 10-lap feature started off with contact and spins between both Maleesa Miles and Kimberling. Kadence Mace took the lead on the restart and looked as though she was in line to take her first win ever. Confusion took place on lap five when Mace slowed and Kimberling pulled into the pits when officials notified drivers that they had reached the halfway point. Miles kept her foot in the gas and was able to take the lead. Miles held on from there to take the win. Mace placed second while Charles French finished third, Quintin Ikeya fourth and T.J. Sorrels fifth.

Shannon Palmer took her first ever win in the trophy dash. Points leader JR Brandt was the winner of the heat race. Nick Ford was able to get to the lead early in the feature race and took the victory. Palmer took second over Daniel Buell, JR Brandt and Ronny Crump.

Trevor Eacret and Gary Klinetobe were the winners of the two Compass Community Credit Union roadrunner heat races. The main event started off chaotically with an incident that knocked out Eric O’Ferrall. The race featured a fantastic battle for the lead between Jarrett Mayo, Klinetobe and Murrell. Klinetobe was able to take the lead and hold off Murrell and Mayo to win. Rick Estes was fourth with Eacret fifth.

Redding-area visitor Brian Kamisky won the heat race for the North Coast Lighting And Electric Legends. The main event started off with a heavy hit between two drivers when Leonard Ward and Brent Mack tangled going into the third turn. Both drivers hit the wall hard and while their cars were severely damaged, neither driver suffered any injuries. The race resumed and one of the best battles of the season took place between Kamisky and Buddy Cox. The two drivers traded the lead several times before Kamisky took over. Cox tried a move on the last lap but lost his momentum giving Kamisky the hard-fought win. David Dunlap finished third while James Nichols and Brandon Winters were fourth and fifth.

The Mid City Motor World late models had a 15-car turnout that was reduced to 14 after Shawn Andrews suffered issues in qualifying that ended his day early. Kenny Demello took the win in the first heat while David Miller’s win in the second heat granted him pole position for the main event.

The feature race was scheduled to run 75-laps but several incidents forced officials to cut the distance to 50. A major incident took place on lap two going into the third turn when Dennis DelBiaggio and Marty Walsh getting collected. Both drivers slammed into the turn three wall at high-speed. Thankfully DelBiaggio and Walsh were able to exit and walk away unharmed but the wreck forced a lengthy cleanup for the volunteer crew.

The restart was brief when apparent contact between Keith Nelson and Derek Copeland cut Copeland’s right front tire going into the first turn. Copeland was able to slow enough to avoid getting serious damage but his night was finished. The next restart was just as brief as Kenny Demello got into Sierra Furia in turn one. Furia spun but was able to avoid contact and resume racing.

The next restart proved to be the last as the battle for the lead and the eventual victory was determined between Miller, Henderson and Nissen. At one point, Nissen was able to make a run on Miller but didn’t have the strength to finish the pass. With the field spread out, the race was decided by handling and how each driver would be able to maneuver through slower traffic. Nissen was able to stay within two to three car lengths of Miller but was unable to get closer. At the finish it was Miller winning over Nissen, Henderson, Luke Hall and Nelson.

Only two races are left at Redwood Acres Raceway in 2019. The next on the docket is Saturday September 7. It will be Fan Appreciation Night at the Acres with all six local divisions in action. The mini stocks will be holding the annual “Murrell 500” event. For more information visit Redwood Acres Raceway’s website www.RacinTheAcres.com. You can also find RAR on Facebook or on Twitter @RacinTheAcres.