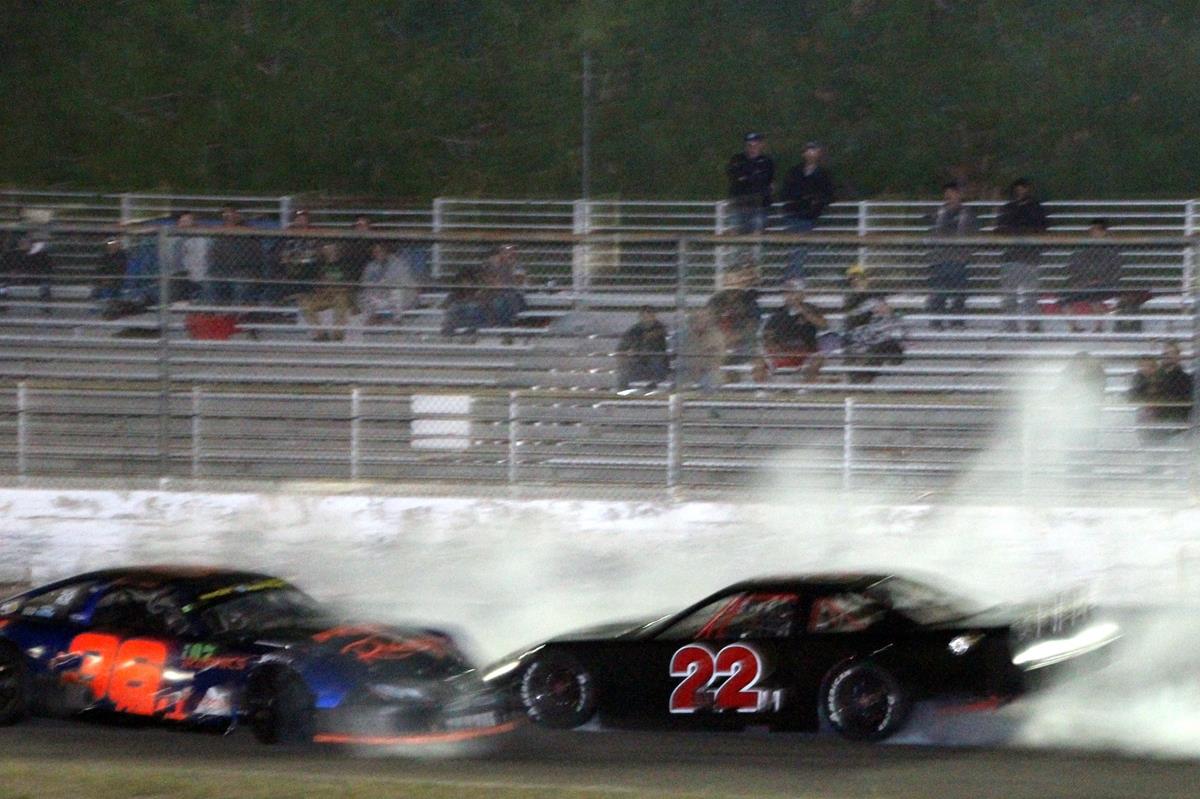 It was the penultimate race of the season Saturday night at Redwood Acres Raceway. The 3/8-mile paved oval played host to Fan Appreciation Night which was presented by Anderson Logging. Fans had the opportunity to meet their favorite drivers in all six divisions on the front stretch prior to the start of the racing action.

After the fan meet and greet, a memorial lap and a moment of silence was held for former RAR regular and Northern California late model touring champion Howard Ford who recently passed away. Ford raced at the Acres in the early 90s in the street stock and sportsman divisions before racing various late model touring series later in the decade. Ford was a two-time winner of RAR’s Fall Spectacular.

Maleesa Miles was fast time for the Anderson Logging Bandoleros with a 21.402. Kadence Mace took her first ever victory in the trophy dash then followed up with the heat race win. The feature event started off with Mace in the lead but Aiden Kimberling was able to get by on lap five while Miles followed him into second. Kimberling was able to lead the rest of the way to earn his first-ever feature win. Miles was second over Kadence Mace, Kilee Cabal and Jack Myer.

Qualifying for the Compass Community Credit Union roadrunners was paced by rookie Shannon Palmer with a 20.652 lap time. Nick Ford won the trophy dash while Bryan Brandt took the heat race win but blew up coming to the finish which knocked him out from starting the feature event. Tim Ratzlaff started off with the lead in the main but on lap three Palmer moved to the front. Palmer held on until lap 10 when Ratzlaff was able to retake the lead. Daniel Buell passed Palmer on lap 14 but could not mount a challenge in the remaining handful of laps. Ratzlaff took the win over Buell, Palmer, JR Brandt and Ford.

Ryan Walters time of 18.477 was best for the Four Star Realty bombers. Sam Brown was the winner of the trophy dash while Walters won the heat race. Brown jumped to the lead at the start of the main event and never looked back. Contact on the last lap between Walters and Raquel Krupa sent Krupa in a spin. Brown was able to take the win with Jordan Krupa second, Raquel Krupa third, Walters fourth and Doug Way fifth.

Fast time for the North Coast Lighting And Electric Legends was Leonard Ward with an 18.283. Tyler Peach won the dash with Brandon White winning the heat. David Dunlap held the lead from the drop of the green flag in the 30-lap main event. Dunlap was dogged by the pack the first eight laps. On lap nine, White moved by to take the lead. Peach moved to second lap 12 with Chris Lawrence moved past Dunlap to third. White was able to expand his lead while Peach and Lawrence fought for the second position. Lawrence was able to finally pass Peach on lap 24 but the gap between he and White was too great for him to overcome. At the checkered flag it was White winning over Lawrence and Peach. Dunlap was fourth with James Nichols fifth.

The annual Murrell “500” took place for the Compass Community Credit Union mini stock division on the night. Brian Murrell, Sr.’s 18.872 was the standard set in qualifying. Brett Murrell won the trophy dash. Heat race one was won by Brian Murrell, Jr. while heat two went to Murrell, Sr. The 50-lap feature ended up being survival of the fittest. Jarrett Mayo led the majority of the first half of the main event and looked to be the driver to beat. An incident in turn one involving Bubba Klinetobe and Trevor Eacret changed the complexion of the race. Both drivers were knocked out of the race. Under the red flag, Mayo’s right front tire went flat which forced him to the pits and out of the lead.

Rick Estes inherited the lead after the restart. While lapping Allison McCarty in turn three, Estes made contact with both drivers ending up in the wall. The race resumed with a battle for the lead and the eventual race win taking place between father Murrell, Sr. and son Brett Murrell. Murrell, Sr. was able to get the better of his son and was able to hold on for the win. Brett Murrell was second with Gary Klinetobe placing third. Estes was scored fourth with McCarty fifth.

Randy Houston was quickest of all the Mid City Motor World late models with a 15.998. Luke Hall’s win in the heat race gave him pole position for the 75-lap main. Hall held the lead in the early stages of the race before David Miller moved to the top spot. Miller looked to have the strongest car of the field but things changed when he started attempting to lap cars. While coming behind Hall off turn four, Hall’s left rear failed sending him spinning. Miller was able to avoid serious damage but he did get enough on his left front fender which forced him to the pits.

Houston moved to the lead but it didn’t take long for Miller to be right back up front. The two restarted side-by-side up front at one point when there was contact that spend Miller spinning off turn two. Houston retained the lead while Miller had to restart at the rear of the field. Miller moved to second lap 36 but it was clear the strength his car had before was lessened. With Houston leading, Miller’s car began to fade in the final flew laps as Dane Nissen and David Henderson moved to second and third. The checkered flag dropped over Houston with Nissen and Henderson in second and third. Miller was fourth with Hall finishing fifth.

The 2019 season will conclude Saturday September 21st with the Fall Spectacular. Championships will be decided in the Bandoleros, roadrunners, mini stocks, Legends and late models while the North State Challenge Series will visit the Acres for the third time this season. You can find RAR on Facebook and on Twitter @RacinTheAcres.