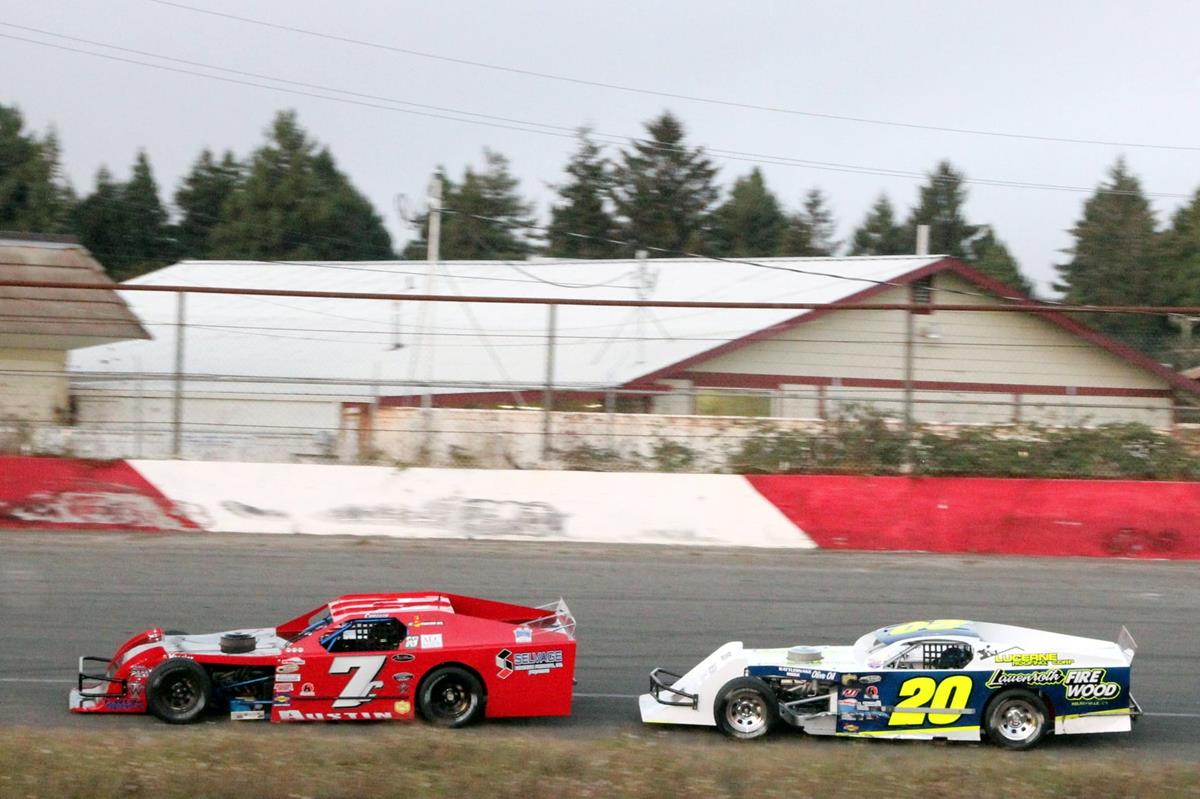 Austin Holds Off Knight In NSMS Thriller, Track Champions Crowned At The Acres

The Fall Spectacular concluded the 2020 season for Redwood Acres Raceway this past Saturday afternoon. It was the fifth race for the year with the majority of the season being forced to cancelation due to the COVID-19 coronavirus pandemic. Track champions were decided in the roadrunners, mini stocks, bombers, Legends and late models. The North State Modified Series joined in on the action which was presented by McMurray And Sons while Eureka Oxygen posted bonus money for the bomber, Legend and late model main events.

13 cars showed for the roadrunners but Aiden Kimberling and LeRoy Marsh, Jr. were knocked out of action in qualifying and were unable to race. Points leader Bryan Brandt was fast time with a 20.038. Brian Hopkins was victorious in the first heat race while Dave Rogers won the second heat. Jeremiah Martin jumped to a huge lead at the start of the 20-lap main event. Tim Ratzlaff briefly took the second position before Rogers and Brandt moved past to second and third. Brandt pulled out to a lead of half a straightaway but the gap slowly closed in spite of Brandt and Rogers having a side-by-side duel for the runner up position. With five laps remaining, Martin’s lead had virtually been erased as Bryan Brandt, Rogers, Ratzlaff and JR Brandt were all within striking distance. In spite of the late race pressure, Martin held firm to the lead. At the finish it was Martin wining over Bryan Brandt, Rogers, Ratzlaff and JR Brandt. Bryan Brandt earned the 2020 championship for the division.

Mini Stock qualifying was paced by Eric O’Ferrall with an 18.964. O’Ferrall was the winner of the heat race. Nick Ford held the lead at the start of the 25-lap main. An early spin by C.J. Dalton bunched the field on lap five and racing resumed with Ford still leading. Ford pulled away from the pack as the faster qualifiers maneuvered through the pack. Ford held on to the top spot until lap 15 when Jarrett Mayo made the pass on the high side. O’Ferrall moved to second two laps later and attempted to close in on Mayo. Klinetobe passed Ford for third with two laps remaining. O’Ferrall attempted to close in on Mayo but wasn’t able to make a serious challenge for the lead. The finish saw Mayo winning over O’Ferrall. Klinetobe’s third place assured him the 2020 mini stock championship. Ford placed fourth followed by Dalton in fifth.

Jordan Krupa’s 18.672 was fastest for the bomber division in qualifying. Only one point separated the two championship rivals going into the evening as Sam Brown led Donnie Brown. The heat race was won by Donnie Brown. Going into the main event, the points gap remained the same as both drivers earned the same amount of points between qualifying and the heat. After several laps of side-by-side racing, Raquel Krupa was able to take the lead while the two title rivals came into contact on lap two going down the front stretch. Both drivers regained control while Tony Ramazzotti made an evasive maneuver into the infield but was able to get back onto the track without incident.

Donnie Brown moved under and by Sam Brown for second and began to reel in Krupa. The top two drivers were able to pull away from Sam Brown in spite of having a nip and tuck duel for the lead. Krupa was tenacious in her fight to hold off Donnie Brown who appeared to have the faster car. The battle for the race win and the overall division championship took a huge turn on lap 14. Going into turn one, Brown moved under Krupa for the lead. Coming off the second turn, Brown got tight and into the side of Krupa and went spinning into the infield. Donnie Brown was forced to restart at the back while Sam Brown moved to second.

Krupa’s fight for the lead didn’t get any easier as Sam Brown gave her a heated challenge for the position. Brown was on Krupa’s bumper on the white flag lap but lost a bit of traction coming off turn two. That was enough for Krupa to get through the final two turns easier and at the finish it was Krupa taking her first-ever main event victory. Sam Brown held off Jordan Krupa for second to win the bomber championship. Ramazotti took fourth while Donnie Brown’s championship effort came up four points short with a fifth.

Dane Nissen was the championship leader in the Legends division but his regular job prevented him from racing on Saturday. This allowed James Nichols to have a more enjoyable Sunday afternoon as he took the championship. Brandon White nearly broke the track record for the Legends with a 17.859. The first heat race was won by Chris Sarvinski while White won the second. The 35-lap main was one car less with Brad Henderson unable to start. Sarvinski took the lead at the start but the race was halted on lap one when Andy Thornton spun in turn four with Landen Green getting collected. Both drivers were out of the race.

Sarvinski regained the lead following the restart and led until lap nine when White powered by for the position. White pulled away as Sarvinski had his hands full with Chris Lawrence. On lap 19, Lawrence took second going into the third turn. Coming off the fourth corner, Sarvinski spun resulting in a yellow. The restart saw White lead while Nichols was able to get past Lawrence for second. On lap 22, Maleesa Miles spun in turn three. Scott Taylor was collected and was unable to continue while Miles returned to the race. The remainder of the race went green as White pulled away from the pack while Lawrence used the restart to regain second. At the finish it was White beating Lawrence by over four seconds. Sarvinski battled back to finish third with champion Nichols fourth and Tyler Krupa taking fifth.

With Mic Moulton subbing this weekend, Dustin Walters was able to lock up the points championship for the late models. David Henderson was fast time in qualifying with a 16.483. Moulton was the heat race winner. The 35-lap main event was green from start to finish as Moulton jumped to the top spot over Henderson. The two raced nose-to-tail for a while but Moulton was able to slowly pull away. Henderson was able to keep in touch but didn’t have the handling to make a serious change on Moulton. At the finish it was Moulton taking the win over Henderson, Scott Baker, Eugene Palmer and Ed Rasmussen.

The North State Modified Series had an outstanding 19 car turnout thanks in part to bonus money that was provided by Dave McMurray of McMurray And Sons. Series points leader Kyle Tellstrom was fastest in qualifying with a 16.207. Jeremy Nowlin won the six-lap Lucas Oil Dash For Cash which gave him $100 while Randy Houston’s second place gave him $50. Keith Bloom won the second dash for cash and $100 sponsored by Redwood Acres Raceway with Chris Salmina got $50 for second.

The 60-lap feature event was minus a key starter as Charlie Collins was unable to make the start. Collins was second in points going into the afternoon and would have started in the second position as the invert was eight for the feature giving Randy Houston pole position. Collins’ misfortune proved to be of huge help for Cameron Austin as he was able to use the outside front row starting position to move to the lead at the start. On lap two, Jeremy Nowlin’s right front tire went flat going into turn three. Nowlin brushed the wall but was able to limp his car to the pits without necessitation a caution flag. The only caution period of the race came at lap six when Scott Winters lost power going down the back stretch and came to a stop. Winters was able to get going again and return to the back of the field.

Austin returned to the lead on the restart while Darrin Knight was able to pass Houston for second coming off the second turn. The top two pulled away from the pack as Houston fell to fourth after Darrin Sullivan gave him a nudge going into the first turn. Austin pulled out to a half a straightaway lead over Knight while Knight held the same advantage over Sullivan.

With the race going caution-free for the remaining 54 laps, the race came down to which drivers had the better handling cars and which drivers were able to maneuver through slower traffic most effectively. As the race progressed, it was clear that the top two cars were the class of the field. As Austin go to slower traffic, Knight was able to close in little by little. With six laps remaining, Knight had finally closed to within a car length and tried to pressure Austin into making an error. Knight was all over Austin’s mirror in the closing five laps but Austin never waivered despite the immense pressure from behind. At the checkered it was Austin hold in for the win over Knight. Sullivan finished third with Houston placing fourth and Ian Elliott taking fifth.

Redwood Acres Raceway would like to thank our sponsors for the 2020 season: Eureka Oxygen, Four Star Realty, Four Star Mini Storage, Harper Motors, McMurray And Sons, Mid-City Motor World, North Coast Lighting And Electric, Redwood Capital Bank and Vern’s Furniture. Thank you to all of our staff and race officials in helping make the 2020 season happen in spite of the limitations that the pandemic presented for the year. Thank you to all of the racers and crew members for participating this season. A special thank you to all of our race fans. We hope that you enjoyed our live stream coverage and we hope to have you back at the track next season.