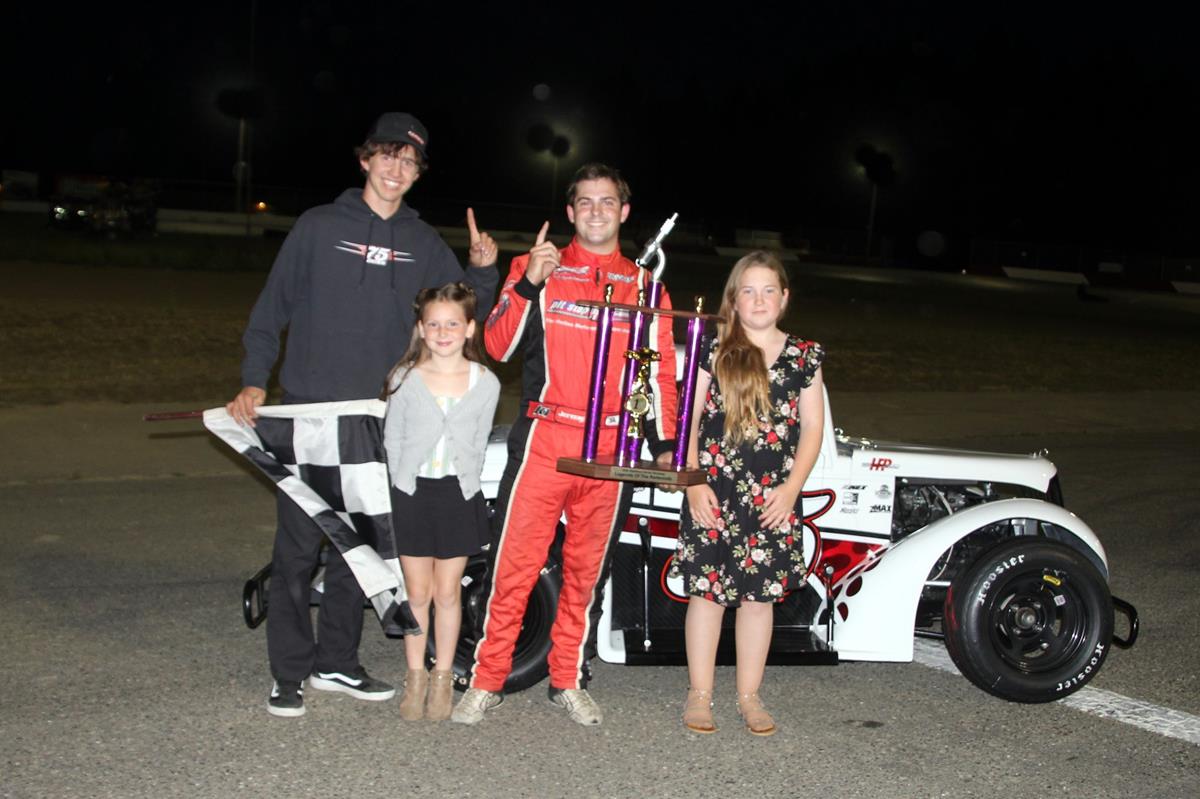 Redwood Acres Raceway held its second annual Legends Of The Redwoods Shootout Saturday night. 18 Legends drivers and teams showed up to participate in the event which was presented by Papé Machinery. Local bombers, mini stocks and roadrunners also raced on the night as well as a contingent of Bandolero drivers from the Mendocino and Lake County areas.

Before the start of the races, Redwood Acres Raceway presented three $1,000 scholarships. Aiden Kimberling, Kadence Toland and Tanisha Ratzlaff were the inaugural recipients of the scholarships.

Jeremy Doss lowered the track record in the Legends division with a 17.565 qualifying time. The first 30-lap main event was a stop and go race with multiple cautions. The most notable came on lap 19 when Brandon White lost control of his car down the front stretch while racing for the lead with Doss. White ended up making a thrilling drive back through the field to finish second while Doss was unchallenged to take the victory. Brett Murrell finished third followed by Tyler Krupa and Chris Lawrence.

The second 30-lap feature was green from start to finish. It appeared as though Doss and White would have another back-and-forth duel for the lead as has happened so often this year but White’s handling wasn’t up to Doss’ as the race continued. At the finish it was Doss taking the $2,000 winner’s share of the purse by over two seconds. White placed second and earned $800. Krupa’s third place finish garnered him $600. Kylie Daniels took fourth while Aiden Daniels finished fifth.

Fast time in bomber qualifying was Tyler Krupa with an 18.552. The heat race victory was claimed by Jordan Krupa. The 30-lap main event began with Jordan Krupa taking the lead but nothing was going to stop Tyler Krupa on the night. He was able to power by his brother to take the lead and ran away to win the race. Jordan Krupa was second over Raquel Krupa, Steve Kimberling and Kadence Toland.

Brian Murrell, Jr. was the standard bearer in mini stock qualifying with a lap of 18.755. When it came time to race, nobody had anything for Gary Klinetobe. He took the heat race win and dominated the main event for the victory. Cole Peterson was second, Colton Kinsey third, Nick Ford fourth and Murrell, Jr. fifth.

Things went very similar in the roadrunners. Dylan Ford was fast time in qualifying with a 20.496 but Tanisha Ratzlaff was unstoppable in the heat race and main events. Ratzlaff won both the heat race and main event to cap off a fantastic night. Brian Hopkins placed second while Dylan Ford, Solomon Kessenich and Nick Ford were third through fifth.

The youngsters in the Bandolero division had a great time taking on the fast 3/8-mile track. Travis Powers was fast time with a 21.098. Ronnie DenBeste was the quickest to take to the circuit by taking the heat race win. DenBeste was virtually unchallenged in the feature as he walked away to win that race. Powers finished second, Lucas Hoben was third, McKayla Johnson fourth and Jarrett Dickson fifth.

The Spears SRL Southwest Tour Series will be headlining the next race at Redwood Acres Raceway on August 13. The premiere late model series on the west coast will present the Rumble In The Redwoods 125 which will draw much of the top talent from up and down the region. Legends and bombers will also be racing on the night.

For full race results and points, visit RacinTheAcres.com. Video on demand of Saturday night’s Legends Of The Redwoods Shootout is available at RacinTheAcres.tv and SpeedSport.tv. You can also find RAR on Facebook and Twitter @RacinTheAcres.