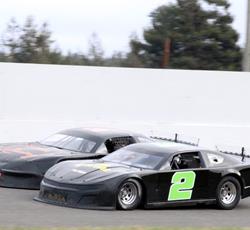 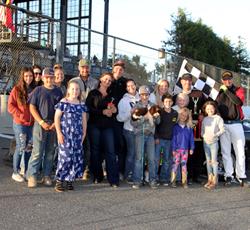 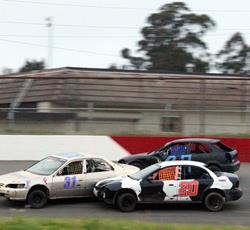 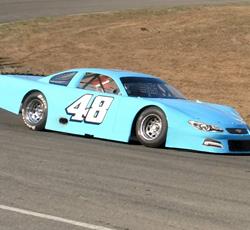 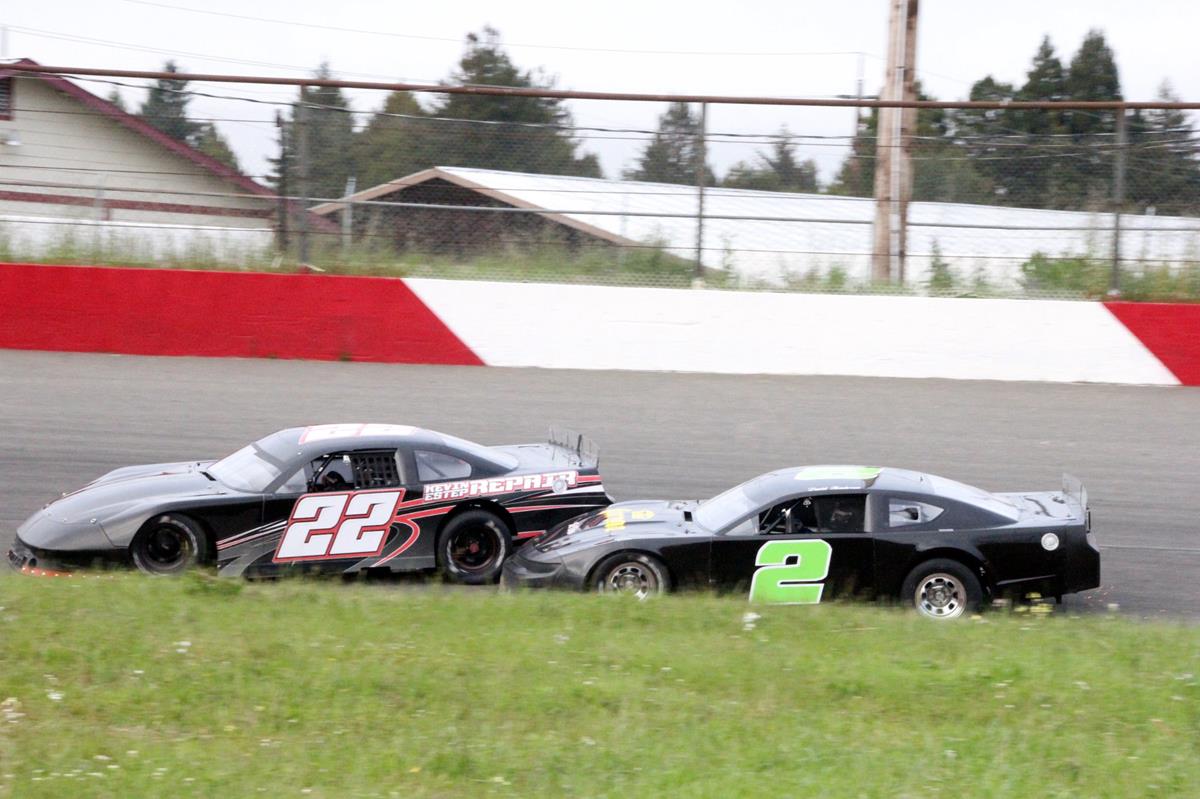 Luke Hall was quickest in late model qualifying setting a time of 15.919. The invert draw for the 75-lap feature event was four which gave the front row to David Miller and David Henderson. Miller jumped to the lead while Henderson slotted into the second position. Racing among the top four of Miller, Henderson, Mike Doss and Hall was tight in the early stages with first through fourth nose-to-tail. An early spin by Kenny Demello off turn two brought out the caution and another caution flew immediately on the restart when Demello and Scott Baker came together in the first turn.

Henderson attempted to utilize the high line on the next restart to try to pass Miller but couldn’t pull the move off which allowed Hall to move to second. Miller’s car began to sound off-key as the race progressed, likely due to a header issue. Even with the problem, he was still able to hold off Hall until a caution for Demello’s overheating car came out on lap 24.

Hall did everything he could on the next restart to try to use the outside line to get by Miller but couldn’t. Henderson was able to get inside of Hall to take second after three laps of back-and-forth racing. Doss moved past Hall into third a few laps later.

Henderson ran behind Miller for several laps until lap 31. Henderson got to the gas much sooner coming off the fourth turn and got into the back of Miller sending him out of the groove. Henderson slipped by for the lead while Miller now had to deal with Doss riding in his mirror.

As the race continued under the green flag, Henderson pulled out to eventually a lead of 3/4 of the track as Miller was doing all he could to hold off Doss for second. With 12 laps left, Doss was finally able to get under Miller and after two laps of racing door-to-door, Doss completed the pass for the position.

Henderson looked to be free and clear to victory but a spin with two laps remaining by Nick Ford off turn two necessitated a restart bringing Doss, Miller and Hall back into the picture. The front row of Henderson and Doss went toe-to-toe on the restart but coming to the white flag, Henderson took the lead. Doss attempted to get the run he needed but got tight and lost his momentum allowing Henderson to pull away far enough that he couldn’t mount a challenge in the final turns. At the checkered flag it was Henderson taking the win over Doss, Miller, Hall and Brandon Barnwell.

Legends division qualifying was led by Tyler Avelar with a time of 18.197. The heat race win was taken by Jordon Paiment. The highlight of the Legends feature was a battle for the lead between Avelar and Tyler Krupa. Avelar led for the majority of the race but the handling on his car appeared to fall off enough to the point where Krupa was able to challenge for the lead. Unfortunately, the two tangled in the late stages of the race ending their chances of winning. Paiment inherited the lead and was able to hold off young Maleesa Miles to take his first Legends division feature win. Krupa and Avelar recovered to finish third and fourth while Chris Sarvinski was fifth.

Jordan Krupa’s time of 18.369 in the bombers was the standard for the division’s qualifications. Tyler Krupa was the winner of the heat race. After a brief battle between the two Krupa brothers, Jordan was able to power by Tyler to take the lead. Jordan was able to hold a steady lead as Tyler had to fend off sister Raquel for second for the rest of the race. At the finish it was Jordan taking his second career bomber main win over Tyler Krupa and Raquel Krupa. Rookie Kadence Toland made a good account for herself with a fourth-place effort while Steve Kimberling was credited with fifth.

Qualifying for the mini stocks was led by Brian Murrell, Jr. with an 18.792. The heat race winner was Gary Klinetobe. Murrell, Jr. took the lead early in the feature event and never looked back taking the victory over Cole Peterson, Klinetobe and Allison McCarty who was driving Jarrett Mayo’s truck for the night.

Fast time for the roadrunners was Dylan Ford with a 20.719. Tanisha Ratzlaff appeared to have a potential win in the heat race in her grasp until her right front suspension failed ending her night early. Jeremiah Martin took the heat win. The feature event was a thrilling three-car battle between Martin, Nick Ford and Dylan Ford. The three were within constant touch with each other all the way to the last lap. Coming off the fourth corner, Dylan got into Nick while Martin went all the way to the wall. Nick was able to save his car and win the race to the flag as he took the victory over Dylan Ford and Martin.

Racing returns to Redwood Acres Raceway on Saturday June 4. The North State Modified Series will make their first visit to the Acres of 2022 while Legends, bombers, mini stocks and roadrunners will also take to the track. Full race results and points are available at RacinTheAcres.com. A full video on demand replay of Saturday night’s race can be seen on RacinTheAcres.tv and SpeedSport.tv. You can also find RAR on Facebook and Twitter @RacinTheAcres.