9/12/2021 -
It was a busy and race-filled weekend this past Friday and Saturday night at Redwood Acres Raceway. The Legends Of The Redwoods Shootout was the featu

8/30/2021 -
The 2021 season at Redwood Acres Raceway is quickly coming to a close. With the number of races being fewer and the chances to gain points and win rac

8/17/2021 -
The first of two August events took place this past Saturday night at Redwood Acres Raceway. It was Papé Machinery Night at the 3/8-mile paved oval wi 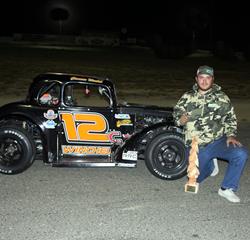 9/12/2021
It was a busy and race-filled weekend this past Friday and Saturday night at Redwood Acres Raceway. The Legends Of The Redwoods Shootout was the feature attraction for both nights thanks to Buddy’s Towing, Cook’s BBQ and Shafer’s Ace Hardware. Friday’s event included all...more 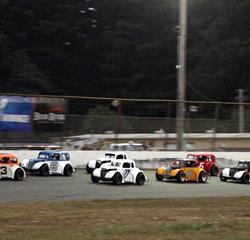 Legends Of The Redwoods Shootout Double Header Set For Friday And...

9/7/2021
Redwood Acres Raceway will be closing out the 2021 season in grand fashion this month with two two-day events scheduled including the Legends Of The Redwoods Shootout this Friday and Saturday September 10 and 11. Buddy’s Towing, Cook’s BBQ and Shafer’s Ace Hardware are...more 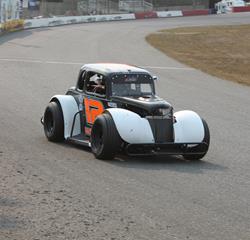 8/30/2021
The 2021 season at Redwood Acres Raceway is quickly coming to a close. With the number of races being fewer and the chances to gain points and win races being fewer, every lap in every race is becoming more and more important. That was evident this past Saturday night as...more 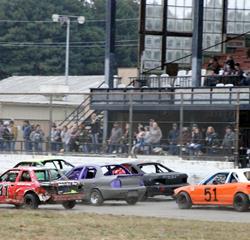 8/24/2021
Only five races remain on the 2021 schedule for Redwood Acres Raceway including this Saturday’s event on August 28. Redwood Capital Bank will present the afternoon of racing with Legends, bombers, mini stocks and roadrunners participating on the night. Admission for...more 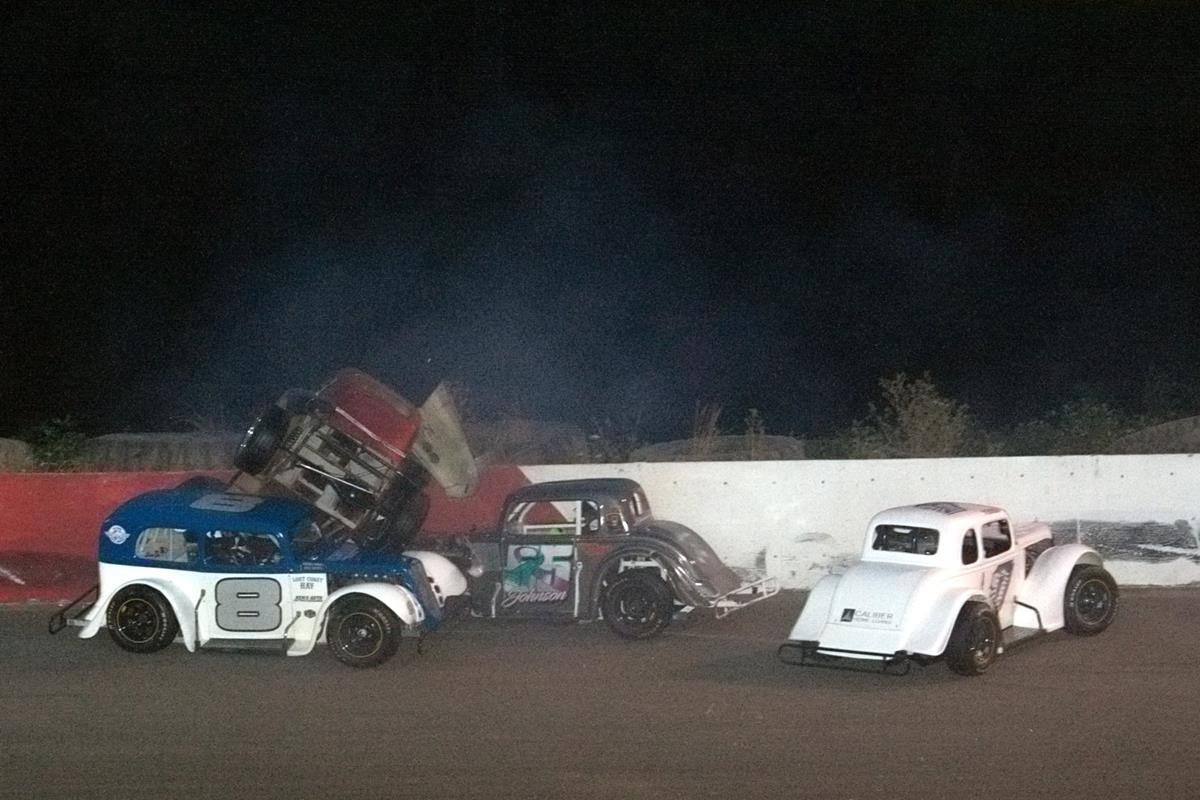 The first of two August events took place this past Saturday night at Redwood Acres Raceway. It was Papé Machinery Night at the 3/8-mile paved oval with all local classes of roadrunners, mini stocks, bombers, Legends and late models taking to the track.

Roadrunner qualifying was paced by first-timer Ryan David whose fast lap was a 20.172. Tanisha Ratzlaff and Bob Ratzlaff were the winners of the two heat races. The first lap of the 20-lap feature was a land rush to the front with faster qualifiers trying to get to the front as possible. Bob Ratzlaff led the first lap and was able to hang on to the position on lap two when he and Brian Hopkins made contact in the second corner. By lap five, Jeremiah Martin moved to second and the front two continued their season-long rivalry for the race lead and win. A lap nine spin by Tanisha Ratzlaff bunched the field for a restart.

On the restart, Ratzlaff appeared to have issues getting going which allowed Martin to take the lead and Nick Ford to slot into second. A multi-car wreck occurred in the third and fourth turn but fortunately none of the drivers involved suffered race-ending damage. Ratzlaff got a much better start on the subsequent restart but Martin powered back to the lead. Martin was able to lead the rest of the way to take the victory. Bob Ratzlaff finished second while Tanisha Ratzlaff recovered to take third. David had a strong fourth place effort while Shawn Wildman finished fifth.

Gannon Cyphers continued his dominance in the mini stock division by setting fast time in qualifying with a 18.906 then winning the heat race. Sam Brown took the lead at the drop of the green of the 25-lap feature over Cole Peterson. On lap three, Brian Murrell, Jr. and Cyphers moved past Peterson for second and third positions. Two laps later, Murrell and Cyphers got by Brown and started a duel for the lead between themselves. Cyphers had just begun to pressure Murrell when a lap nine wreck going into the third turn knocked Colton Kinsey out of action.

Murrell and Cyphers resumed their battle on the restart but contact off turn two sent both drivers to the rear and gave Joe Bonomini the lead. Bonomini pulled to the lead and tried to put a gap on the field while Cyphers and Murrell tried to get back to the front quickly. With nine laps remaining, Cyphers powered by Bonomini on the outside to take the lead. Murrell moved to second on lap 21 but Cyphers’ lead was too great to overcome. At the finish it was Cyphers winning over Murrell and Bonomini. James Nichols was fourth with Eric O’Ferrall taking fifth.

Fast time for the bomber division was Raquel Krupa with an 18.534. Ed Rasmussen was the winner of the heat race. The 25-lap feature was clean and green from start to finish. Jordan Krupa held the advantage for the majority of the race but as the laps clicked off, it appeared the handling on his car began to go away. It didn’t help that Jordan was pressured all race long by his brother, Tyler. On lap 20, Jordan slipped up off the second turn which allowed Tyler to get the run he needed on the inside to take the lead. Jordan did all he could to recover but didn’t have what he needed to mount a serious challenge. The checkered flag dropped with Tyler Krupa taking his first bomber feature win. Jordan Krupa finished second with Ed Rasmussen, Raquel Krupa and Steve Kimberling completing the top five.

Brandon White’s 17.847 was the standard set in qualifying for the Legends division. Young Maleesa Miles made her first start of the 2021 season and was the winner of the first heat while White won the second. Tyler Peach used pole position to his advantage to move to the lead when the green dropped in the 35-lap main. It took White only three laps to move to second position. A spin by Dustin Meier off turn two resulted in an early caution flag.

The yellow played right into White’s hands as he moved to the lead on the restart. Chris Lawrence moved his way to second on lap six and tried to catch White who had a six car length advantage. A spin by Justin Johnson in turn two resulted in a caution on lap 15. Green flag racing only lasted a few laps after the restart due to a turn two accident for Emily Vest. Turn two proved to be a trouble spot for Miles as she spun on lap 25 to bring out another caution. The following restart had a big pile-up in the first turn after Scott Taylor spun back up into traffic. Also involved were Miles, Rick Estes, Johnson and Meier. White retained the lead after a lengthy clean up and was able to go on to take the main event victory. Lawrence finished second with Brett Murrell, Peach and Tyler Krupa third through fifth.

Qualifying for the late models division was paced by David Henderson with a 16.459. Dustin Walters was the heat race victor. The 35-lap feature was led flag-to-flag by Walters. The race featured a lone caution flag on lap 10 when Nick Ford got into Scott Baker in the first turn collecting Eugene Palmer. Walters’ margin of victory was over four seconds over Henderson. Ford placed third with Scott Baker and Palmer fourth and fifth.

Racing returns to Redwood Acres Raceway on August 28. Legends, bombers, mini stocks and roadrunners will be in action while the late models are off for the event. For more information, visit www.RacinTheAcres.com or find RAR on Facebook or Twitter @RacinTheAcres.